Born in New York, NY and grew up in Berlin.  In the early 1970s she moved to Ireland and had a successful career in children’s book illustration. She received a prize at the Graphic-Biennale in both Kracow, Poland and Frederikstad, Norway. In 1989, she has the been the subject of a series of solo exhibition at the Kenny Gallery in Galway “Farewell to Connaught,” which explored the way in which Irish culture is viewed by outsidersThese include “Women in Music” – a series of some seventy images of female musicians, often playing the most extraordinary instruments.”Vagabondage” and  “And Passes By” and in 1996 “Paradise Lost”. She currently lives and works in Mainz, Germany. 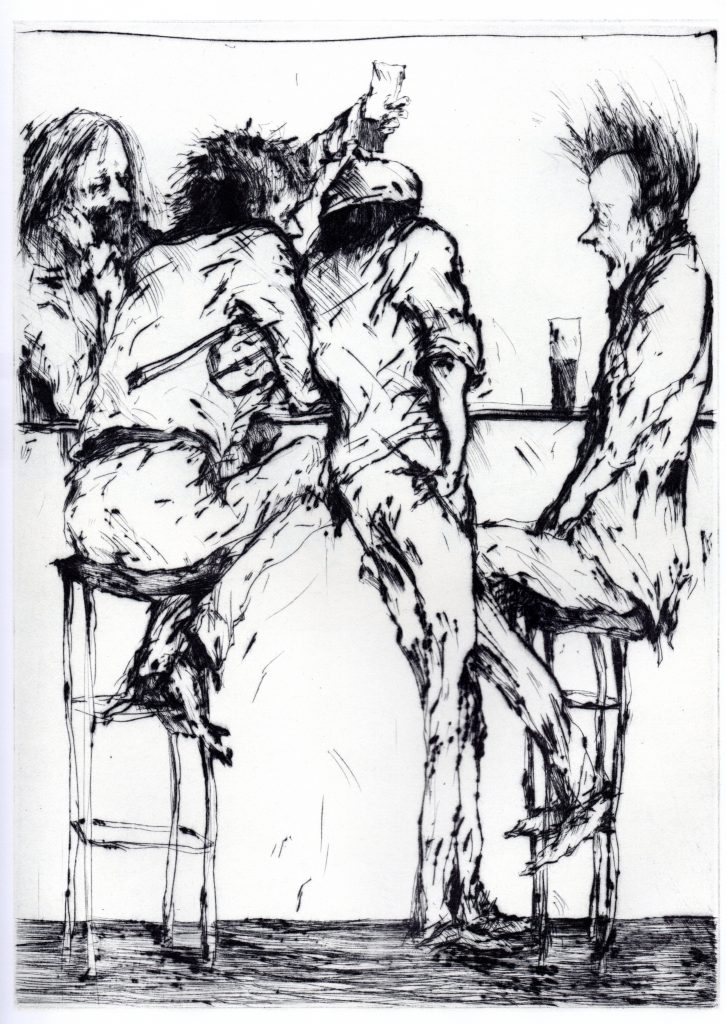 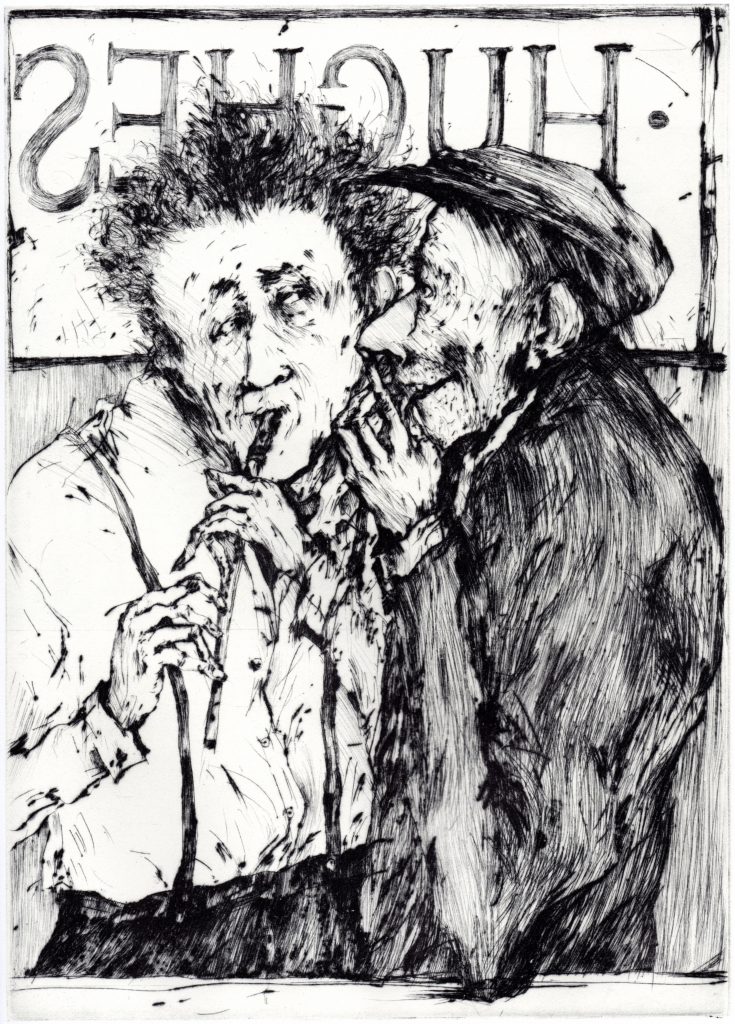 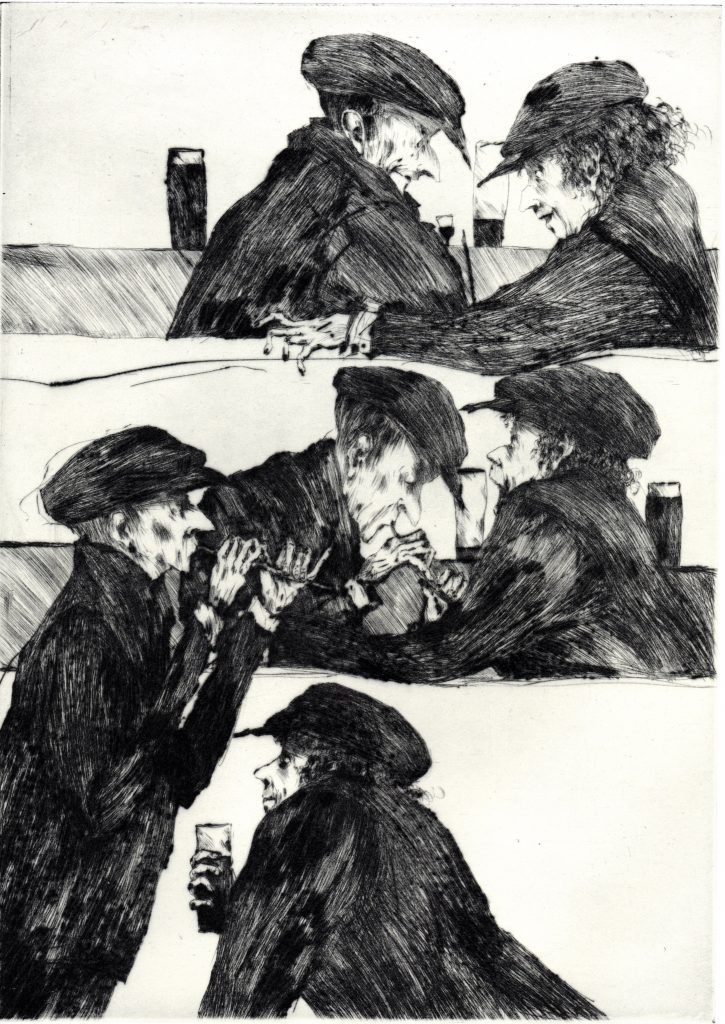 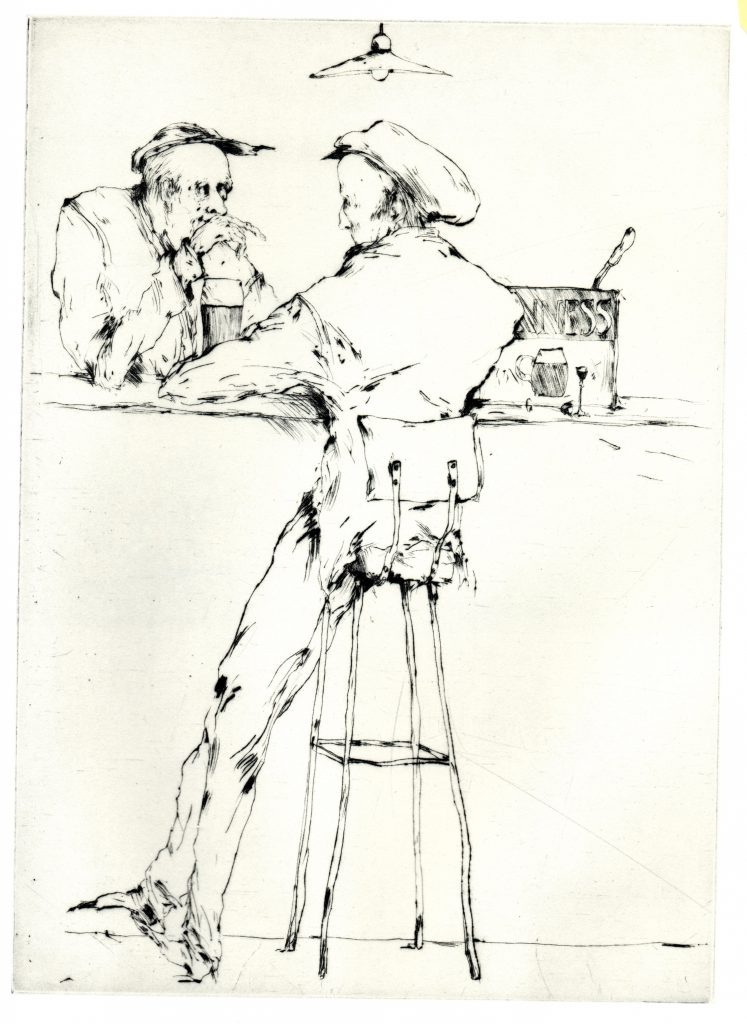 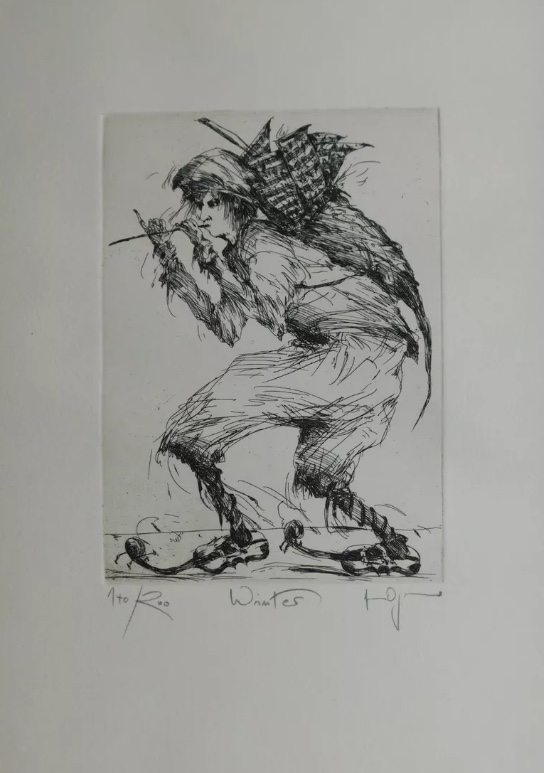 Born in Warsaw and studied at the Warsaw Academy of Art from 1927-1932.  In 1933, he began the first of a series of journeys around Europe, settling in London after his 1935 commission to record King George V’s Silver Jubilee.

He made face to face portraits of the leading personalities of the 20th century from Gandhi to Shaw, from Churchill to Martin Luther King (and stage and screen giants such as Edith Evans, Alec Guiness and Laurence Olivier) providing portraits for John Freeman’s 33 ground-breaking ‘Face to Face’ interviews.  He designed costumes and sets for the plays of GB Shaw & illustrated many of his works.

An official war artist he joined the first Arctic convoy to Russia in 1941 and was in Bergen-Belsen concentration camp two weeks after its liberation in April 1945, and at the Nuremberg Trials.

The V&A was considering the purchase of three drawings by Topolski, then unknown. One committeeman said: “We must draw the line somewhere!” To which Augustus John responded : “But can you draw the line like Topolski?” His drawings were accepted!!

He also published 24 books of his own including his autobiography ‘Fourteen Letters’, and Confessions of a Conference Delegate – his record attending the International Congress of Intellectuals For Peace held in Poland in 1948.  He  painted a panorama he called Memoir of the Century, now renamed Topolski Century.

Feliks Topolski’s Chronicles, broadsheet drawings of his travels, documenting history as it happened,  were produced from 1953-1979.  These extraordinary images, with his unmistakable graphic style, satirical humour and compelling subject matter illustrated for several decades and described as “the most brilliant record we have of a contemporary scene, as seized by a contemporary mind”.

Topolski’s Chronicles contain over 2,300 drawings.   An original broadsheet came out twenty-four times a year. It was hand-printed, usually on butcher paper, produced initially, on an old pedal press by the artist himself, in his own studio.

Throughout the years the Chronicles grew larger and ever more elaborate in scope, content and size with colour sections in some issues.  The Chronicles are glowing with visual vitality; bristling with comment and observation about the people, politics and events of the time.  They not only exemplify the constantly productive versatility of Topolski’s draughtsmanship, the universality of his interests, and the exuberant acuity of his vision, but they also demonstrate the artist’s eternal fascination and concern for public life and universal events rather than private issues. 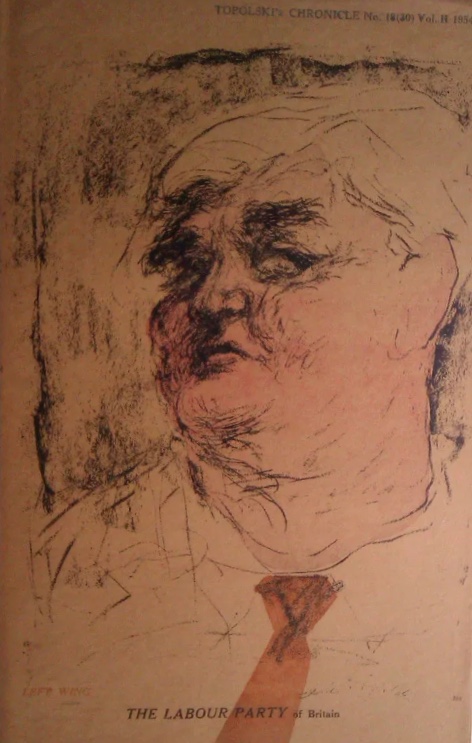 He studied art and went on to have studios at Bolton Studios, South Kensington and later, in 1910, at College Place, Brighton. In Brighton he met Charles Lambert Rutherston (whose fortune came from an inherited woollen business), who became his friend and patron.  (Rutherston gifted works, including at least 5 by HHR, to the people of Manchester, now known as the Rutherston Gift at Manchester City Art Gallery).

He was skilled in a variety of drawing techniques and media, combining ink and graphite, charcoal, pastel and wash.
He moved to Tunbridge Wells in Kent, where he lived an “unconventional” bohemian life with Hilda, his live-in housekeeper, life model and mistress. (The examples of his work I have come from Hilda’s collection via her nephew .) 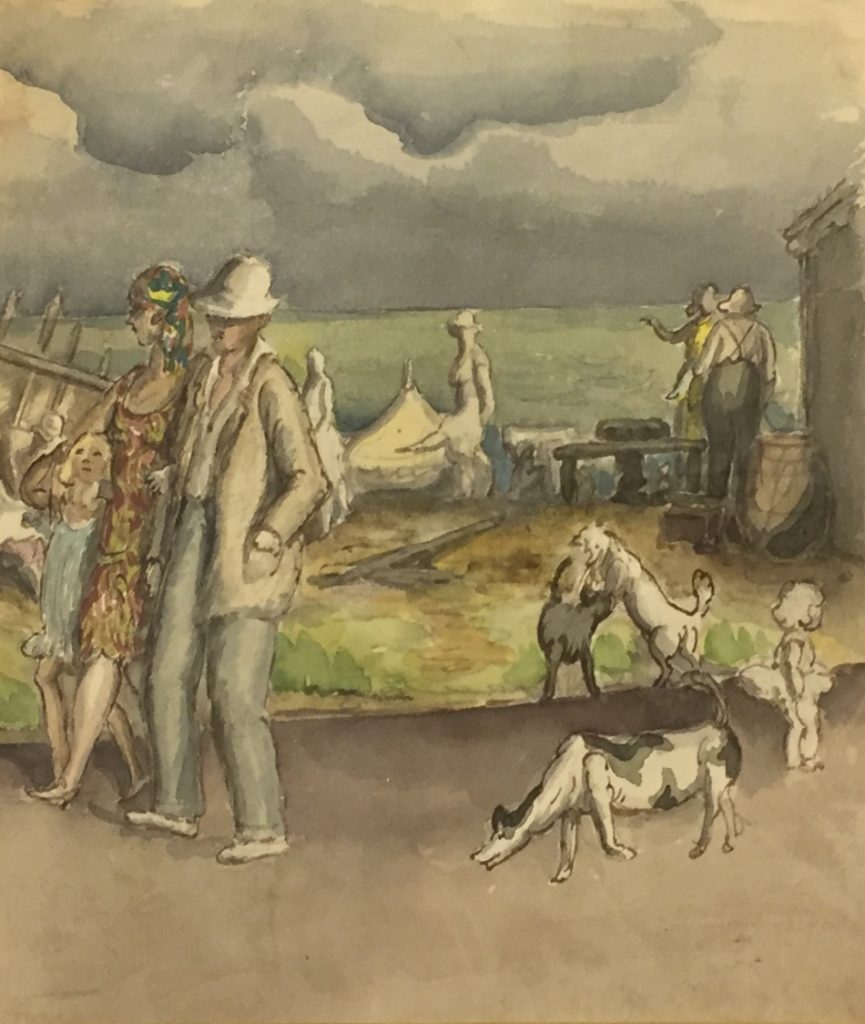 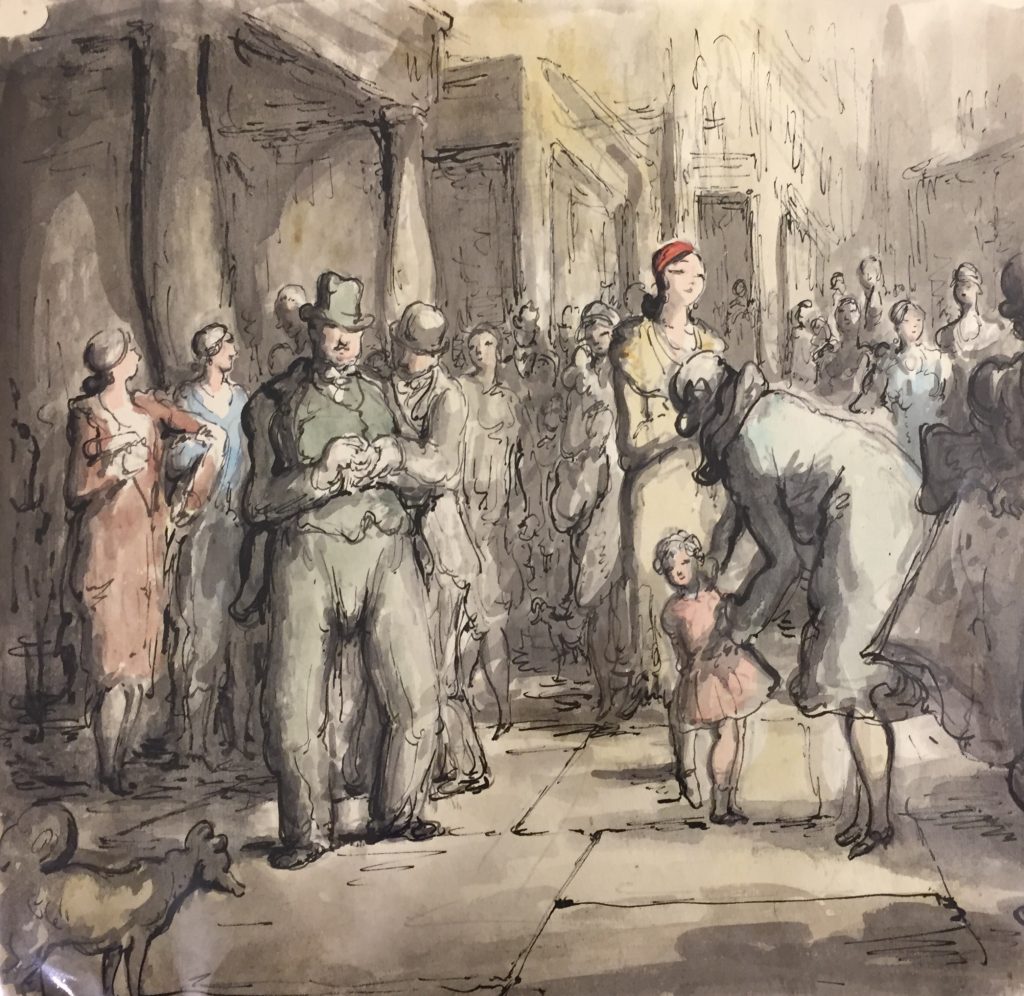 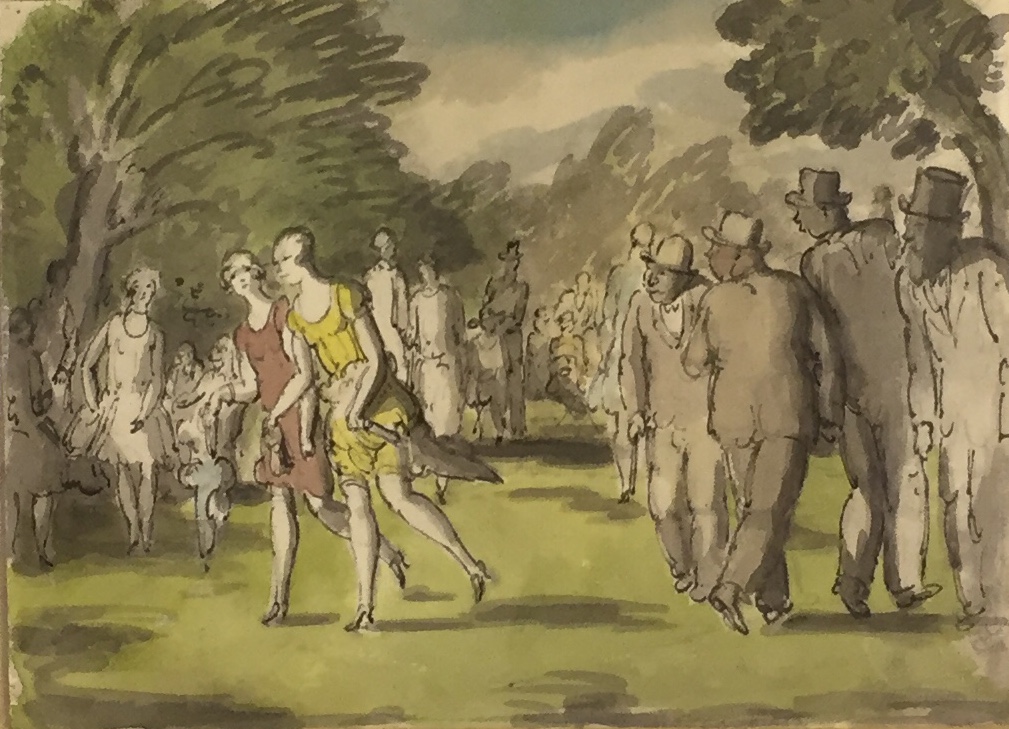 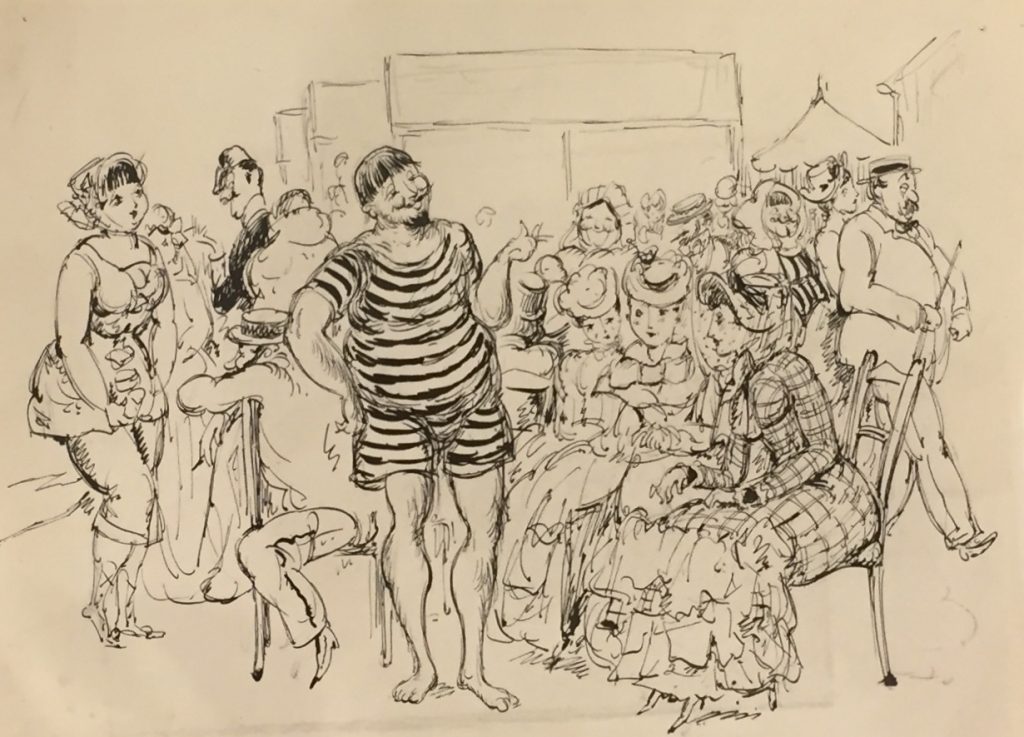 An English artist and lecturer in historical costume and theatre history.  She was also a portrait artist,  working in various media – watercolours, oils & pencil. She is most noted for her Second World War pictures of women engaged in war work.  In 2002 the Imperial War Museum acquired fourteen of her works, mostly depicting uniform production in wartime clothing factories.

1934/38 she was a student at the Central School of Art and Design and during the 1930s she was heavily involved in costume, theatre and fashion-related activities. She was in charge of the décor and scene painting for a production of Shaw’s Saint Joan in 1938, and was the chief designer for the 1938 Birmingham Centenary Pageant.https://en.wikipedia.org/wiki/Saint_Joan_(play)

She returned to the Central School in 1944, lecturing in Historical Costume for almost forty years. In the 1960s she provided to historical costume advice for several feature films, including 55 Days at Peking (1963), and The Fall of the Roman Empire (1964). 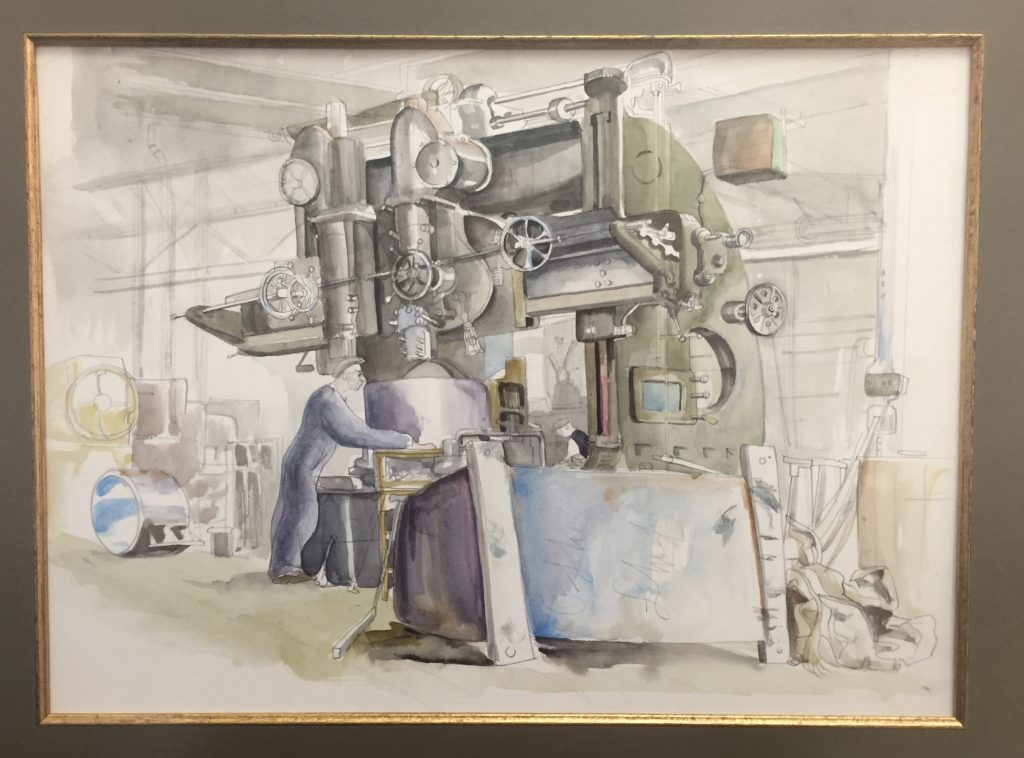 French caricaturist whose illustrations of French high society at play during Les Annees Folles made his
reputation and he became a member of the Salon des Humoristes and the Legion d’honneur in 1904.

He arrived in Paris in March 1900, at the time of the opening of the Universal Exposition picking horse racing as his means of entry into “society”. 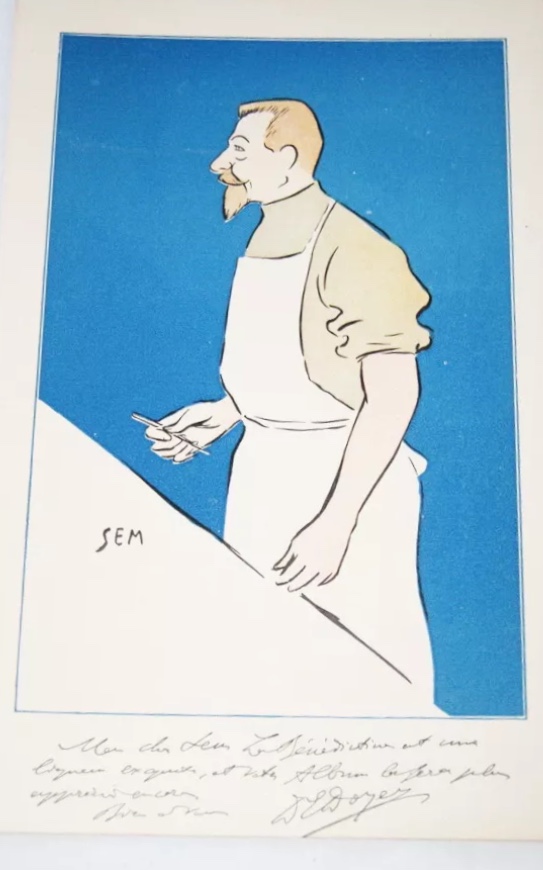 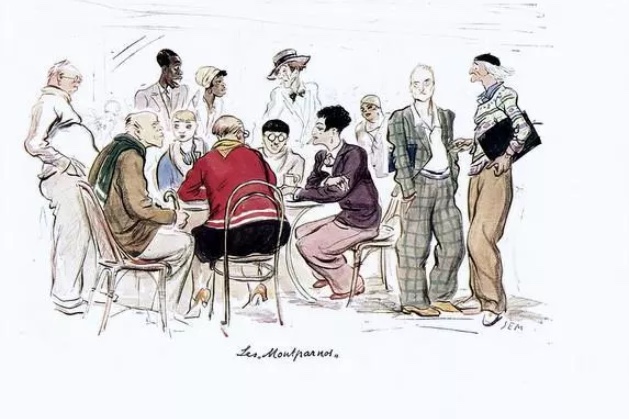 3 months after his arrival he self-published an album, Le Turf, caricaturing many prominent Parisian socialites. Followed by Monte-Carlo in 1905,  Sem a la Mer (1912)  Tangoville Sur Mer (1913) and Le Vrai et Le Faux Chic (1914)After WW1 he continued his depictions of the great and the good at play – including in 1919 Le Grand Monde à l’envers (High Society upside down) and in 1923  La Rond de Nuit and Le Nouveau Monde. He also provided menu illustrations for Parisian cafe Maxim.   In 1927 he published the album White Bottoms, about tango and with a big American influence.

Cyril Bouda is acknowledged to have been one of the best Czech twentieth-century draftsmen and illustrators. A student of Kysela and Švabinský, he became a master of illustration.

Besides many illustrations, he is also known for his tapestry designs. In his drawings he displayed a strong affinity to the Italian Renaissance. His work shows a strong sense of narrative and a sense of detail and humour which makes him a particularly appropriate illustrator of the Prague Legends.

Bouda was also a dedicated teacher throughout his life. His enjoyment of music and poetry meant he mixed with many other artists, for whom he made illustrations or portraits. He was also an accomplished graphic artist. 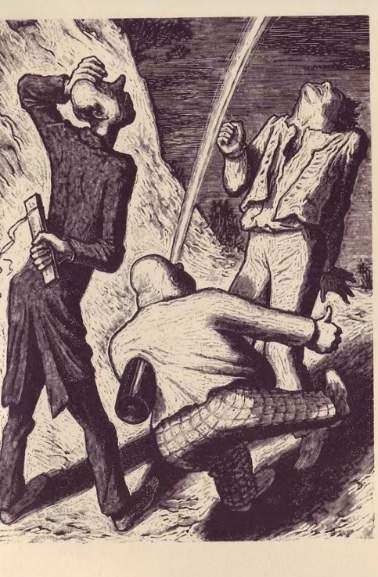 Herbert Samuel “Bert” Thomas contributed Cartoons and Character drawings to The Humorist and Punch magazines and was the creator of British propaganda posters during the First (he was made an MBE in 1918 for his contribution to the war effort) and Second World Wars.

He became nationally known for his cartoon “Arf a mo, Kaiser”, for the “Smokes for Tommy” campaign and the image was re-drawn and used during the Second World War with the caption “Arf a mo, ‘itler” which the Germans banned (!) and to ensure British prisoners’ comfort parcels that included it still got through, he created a variation “Are we downhearted?”

Although born in South Wales he moved to London in 1900 and many of his cartoons featured London scenes and characters – cockneys and toffs!

“Lambeff” (already snapped up I’m afraid!) and a caricature described as being of GK Chesterton (but if time travel was real I would swear it was Ian McEwan!) and a wartime poster “Is your journey really necessary?” – also sold (to be put to new purpose supporting an eco-initiative).

More recently I acquired a collection of 20 of his original 1930s cartoons most of which appeared in The Humorist (in fact I managed to track down the edition in which one of them appeared – which is available to accompany the original). There are a couple framed in Off The Wall and of course the others can be easily framed to order! 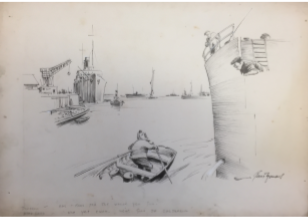 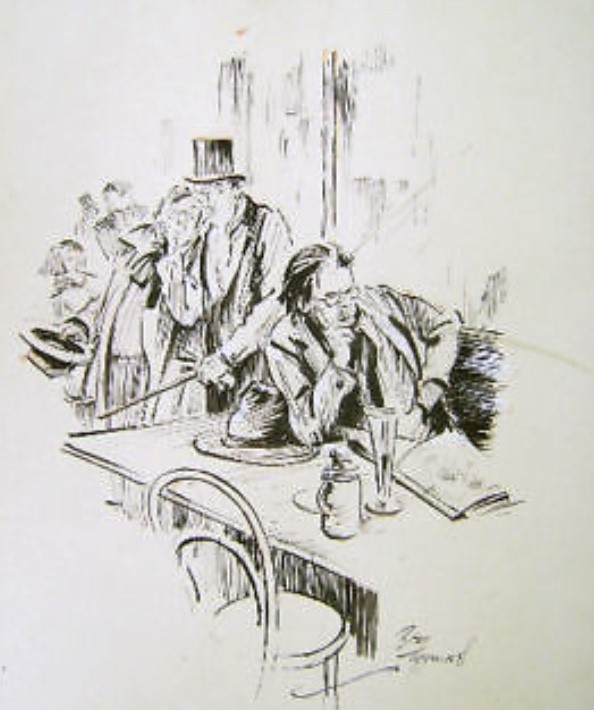 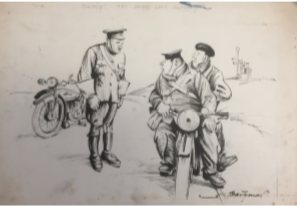 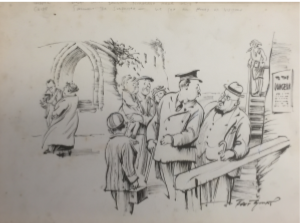 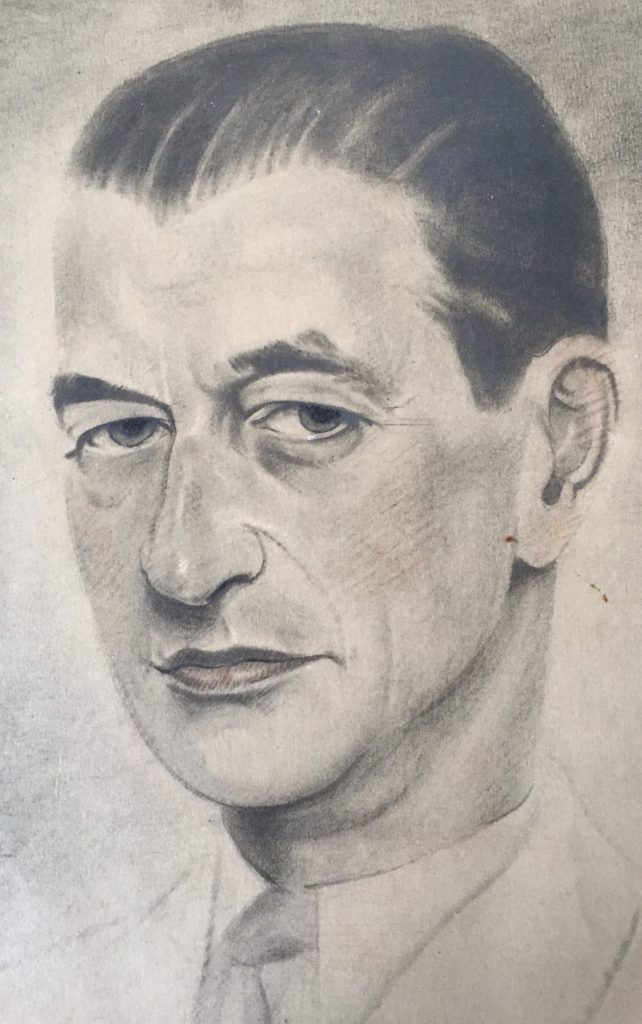 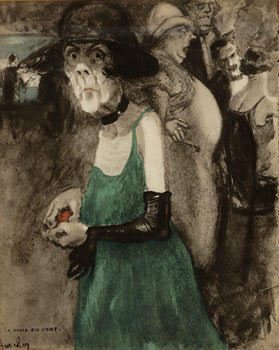 Stop Press : We now have Giclée (high quality digital art prints) of a number of Auscher images produced exclusively for Off The Wall.

French artist and Illustrator, born in Nancy.  He was a pupil at l’Ecole des Arts Decoratifs in Paris and his work was exhibited at Le Salon d’Automne and Le Salon des Tuileries between 1923 and 1933.

His main body of work was created in the 1920s in Paris, including his self-published limited edition folio collections “La Faune des Dancings” (the wildlife of the Dance Halls) (1925) and “Le Baccara” (1926).

They bring to life the more decadent / unconstrained side of Parisian life at the time – in the casinos and gambling dens, the gay clubs, music halls and theatres of the time.Many of the lithographs in these folios were “rehaussee” (heightened) by the application of watercolour. He also recorded the French theatrical community with portraits/caricatures of actors, some in their best-known roles, such as Louis Joubert as “Le Trouhadec Indigne” and the clown Grock.

He illustrated Les Amertumes (Bitterness) by Andre Haguenauer in which he used a more expressionist style (also 1925).  His illustrations for Alfred Marchard’s Printemp Sexuel would certainly be viewed now with great suspicion, including as they do, children in overtly sexual poses.

Francais rediscovered and published in 2004 and later filmed (as was David Golder).  He contributed to the satirical magazine

Le Rire (Laughter) and he was a court artist at the trials of the collaborationist Vichy French government (Petain, Maurras & Laval).

In 1906 Davis became an apprentice with the Daimler Company and trained as a draughtsman and, in 1910, joined the staff of Automobile Engineer as a technical illustrator. After demobilisation at the end of the First World War he became sports editor of The Autocar.

Davis aided his prewar motorcycling associate, W. O. Bentley, in starting his company becoming one of the famous Bentley Boys of the late 1920s, winning the 24 Hours of Le Mans in a Bentley in 1927.

He wrote numerous serious journalistic books about motor racing illustrated with photographs and several more light hearted ones, some published under the pseudonym “Casque” which he illustrated himself with line drawings both humorous and technically detailed, apparently taking particular pleasure in mechanical disaster and driver fallibility!

We have prints of many of these illustrations on The Wall.

For those interested in motor racing – His drawings give a unique insight into the world of racing and racers between the wars, the relationships between drivers, their racing cars, the mechanics who kept them on the road and the officials who helped keep the drivers on the straight and narrow! Taking us back to the time when the same drivers took on the Brooklands banking, the Le Mans roads, the snows of the Alpine and Monte Carlo Rallies and the Mille Milia. And at a time when the challenge of keeping the cars on the road was such that the mechanics travelled in the cars alongside the drivers in order to provide trackside mechanical 1st aid!

But above all they’re about the humour of human fallibility when tested by human and mechanical frailty.